Those humorous little moments on the Tube that only us reserved Brits would worry about have been put under the microscope in a new survey – with the help ofcomedian Russell Kane. 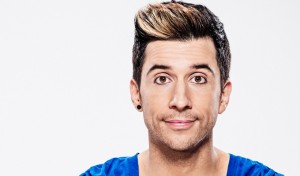 Something as seemingly innocent as ‘making accidental eye contact’ with a fellow passenger has been judged by the public as perhaps the most dreaded faux pas of all, and far worse even than something physical like falling asleep on someone’s shoulder!
The findings are from a poll by filtered water experts BRITA, who are mounting a public information campaign called Travel Smart, reminding passengers to stay hydrated on the Tube this summer.
BRITA’s research of 2,000 regular Tube users, carried out by OnePoll, found that more than two thirds of passengers commit the very real ‘faux pas’ of failing to carry a hydrating drink in hotter weather, despite the regular announcements made on the Underground urging them to do so.

In order to delve further into the other ‘faux pas’ of Tube travel, BRITA enlisted the aid of comic and TV star Russell Kane, who is well-known for incorporating observations on Tube travel into his act – embodied in his smash-hit Smallness show.
Russell said, “The Underground is a metal ‘Test Tube’ filled with the essence of British Reserve. We are trapped for at least the duration of a ‘stop’ in the close scrutiny of our fellow passengers – so any small faux pas we make has the potential to be magnified into a dreadful embarrassment.”
“After 60 long seconds pressed up against a total stranger, even such an innocuous thing as making accidental eye contact can feel like a proposal of marriage!”
The results of the poll explain the practiced ‘Underground Stare’ into the middle distance perfected by regular Tube users, and unwanted looks also figure in the second most practiced faux pas admitted by passengers: the prolific and dreaded ‘getting caught reading someone’s newspaper over their shoulder’!
Number three demands a bit of space! It’s when you make the dramatic leap through the doors in a desperate bid to make the train – and then have to stand or sit feeling foolish for a minute before the doors finally close. In those circumstances, the faux pas-averse really do ‘mind’ the doors! 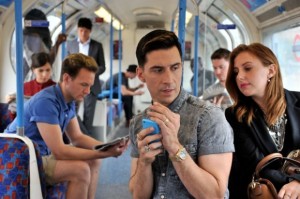 The Top 10 Tube faux pas
1. Making awkward eye contact
2. Getting caught reading a newspaper or a mobile phone over someone’s shoulder
3. Making a dramatic leap through the doors – only to find they weren’t
about to close
4. Not hanging on and falling over when the train moves
5. Waving at someone they thought they knew, but didn’t!
6. Spilling a drink over themselves or the person next to them
7. Falling asleep on a stranger’s shoulder
8. Passing wind
9. Eating smelly food
10. Accidently singing with their headphones on

Russell Kane will be delivering extracts from his Smallness tour and BRITA’s Travel Smart campaign at a private gig. The gig will be held on Monday, 29th September at the 100 Club, London

We have the fantastic prize of two tickets including a meet and greet with Russell after the show!

to win the tickets just email us at enterthecomp@gmail.com telling me the name of Russells new tour

Terms :
A winner will be picked at random on Friday 26th PM
The winner will be notified on the Friday, if they fail to make contact by Monday 29th 9am the tickets will be reallocated. The decision of Gentlemen’s Goods in all cases in final.