Home » Articles » Featured » Luxury Timepieces Are Back in Commission

Luxury Timepieces Are Back in Commission 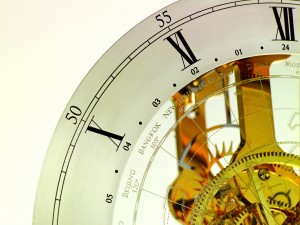 Nearly three hundred years ago, a revolutionary English engineer was designing and hand making precision clocks that were centuries ahead of their time. The original feats of science, design and beauty that one of our greatest minds, John Whitehurst, created can only be currently seen in museums, stately homes and palaces. Which is why I think it’s fantastic news that Whitehurst clocks are back in commission.

During the 18th century, John Whitehurst, famous English industrial revolutionary, was working alongside some of the world’s greatest minds in his hometown of Derby, including Benjamin Franklin, to create most advanced and aesthetically challenging timepieces.

This is a standard that remains at the heart of Whitehurst, where, to this day, expert craftsman in Derby are still practising his art of hand making some of the most advanced, precise and mechanically beautiful clocks in the world.

And now, as it unveils its brand new timepieces to satisfy a renewed, international demand for painstakingly crafted, fine clocks, made to the highest standard, Whitehurst, it seems, is still making the heirlooms of the future.

The new weight-driven Whitehurst timepiece – with its design based on the original Y-Frame clock built in 1770, which today sits proudly at Chatsworth House – incorporates much of the original engineering found in the well-known antique. It is meticulously hand built, piece-by-piece, marrying new technology and three hundred year old techniques.

A commitment to the original Whitehurst ethos of mechanical firsts has allowed for the inclusion of a unique revolving polar projection. So, as well as marvelling at the exposed intricate workings of the complication, you can continuously track the earth’s rotation – and keep a check on the time across the world in a most beautiful way.

As with original Whitehurst timepieces, all of the clock parts are made from material which comes from the same foundry, and, wherever possible, cut from the same piece to enhance precision. Some of the 18 wheels, which turn continuously, are made on machinery that has been making clock parts for hundreds of years. They have been carefully hand filed, hand polished through an eight-stage process and finished in a protective 24 carat gold to ensure a flawless result that can only be achieved through original techniques.

However, new digital and computer-controlled technology, along with the latest developments in materials, have been adopted for some elements – to create clock parts to a standard that even John Whitehurst could only dream about.

Whitehurst Clocks are built to order at a cost of £150,000 – £200,000. Which yes is a lot to spend on a clock but when you think this is the sort of thing you will pass down from father to son from generations to come the cost doesn’t seem so high. I certainly will think about a Whitehurst Clock in the future.

For more information on Whitehurst please have a look at their website www.whitehurstclocks.com or call Whitehurst on +44 (0) 1332 257 118.

The Key to Bottle Opening