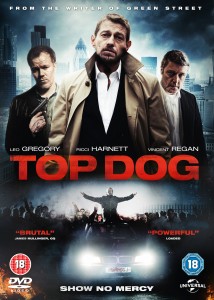 Top Dog tells the story of Billy and his football gang as they take on the local protection racket, maybe not quite thinking through the consequences of doing so!
I thoroughly enjoyed Top Dog it’s a well made well acted British crime movie and if that sort of movie is your bag I’m sure you will love this.

I managed to speak to director Martin Kemp and Actor / Producer Leo Gregory last week and they gave me a great insight into the making of the film check it out below.

Top Dog is released Monday 26 May on Blu-ray and DVD through Universal Pictures (UK).

You can Pre Order from Amazon here