Clean Brass and Silverware in Minutes 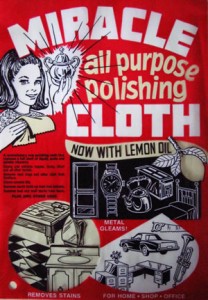 Let’s face it, it’s a dirty job but someone’s got to do it and assuming you are like me and you don’t have a man-servant called Jeeves to do it for you, you’ll want to polish those candlesticks that belonged to Great Aunt Ethel quickly and easily before your date comes over for some microwaved lasagne and a bottle (or two) of Lambrini.  That’s where the Miracle All Purpose Polish Cloth comes in handy.

To say I was sceptical of it’s claims is an understatement.  If the site and the packaging are to be believed this cloth can clean just about anything and what’s more they claim that it will clean it effort free.  I decided to put it to the test with a chrome shaving mirror that has a few water marks from lack of proper cleaning after a shower and shave in teh bathroom.  If I didn’t detest cleaning so much it wouldn’t be in the state it’s in but then again, if I was an efficient cleaner I would have no need for the Miracle Cloth! In just a few minutes I managed to shift those water stains that had been doggedly refusing to budge with umpteen cleaning products for at least 3 years, seeing how easy that was I decided on a tougher challenge, the brass letterbox!

Since installing the letterbox over 6 years ago I have never given it more than an occasional wipe with a damp cloth and we’re talking very occasional here.  Would the Miracle Cloth live up to it’s name? 15 minutes later I was amazed to see it shine like the day I bought it.

I’ve no idea what is impregnated in the cloth but it seems that it’s a formula that’s has been around since 1922 and I can tell you, it works, just don’t ask me how.  Now, if you’ll excuse me, I’ve got to pop some lasagne in the microwave and buff up Ethel’s candlesticks before my date arrives in 20 minutes!