Recently I spoke to Scottish actress Polly Anna McIntosh about her New film White Settlers, her controversial choice of Brown Sauce on chips and the Scottish / English relationship 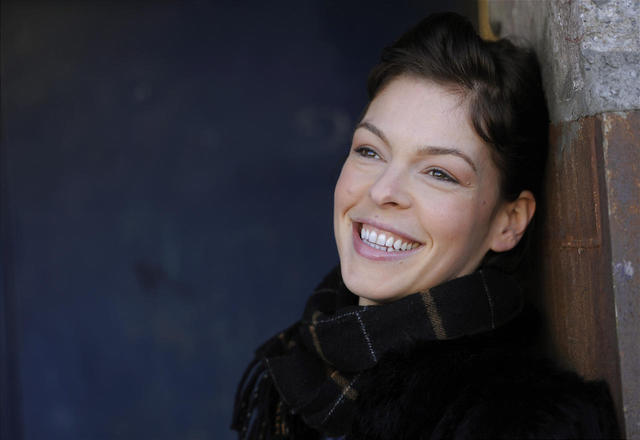 Can you tell us a bit about your new film White Settlers?

It’s about a newly married couple who move from the rat race of London to buy their dream home in the Scottish borders. It’s a foreclosed house that the family who owned it couldn’t keep up payments on and the couple get their dream conversion for a song. The house has a further dark history, having been the site of a ferocious battle between the Scots and the English but Sarah and Ed are not much interested in history, just their own future.  On the first night there together, Sarah gets spooked by bumps in the night which Ed teases her about and brushes off as her paranoia. In the middle of a petty argument Ed goes missing and Sarah must escape and ultimately fight the very real threat that descends upon her.

Being Scottish yourself was there any hesitation being part of the film and how it portrays the locals in the film?

I actually don’t feel it’s anti Scottish. It’s simply a setting for a tale about haves and have nots but I like the ambiguity of who the bad guys really are in this one. Having been written by a Scot and as a Scot I don’t feel so sensitive about exploring this theme in this setting.

Do you think there are enough strong female roles in films? Do you think Sarah is a strong woman?

I think both Sarah and Ed are flawed, I think that’s part of what interested me about doing it in the first place. I think she’s both strong, much more so than she knows at the start, but I also think she can be manipulative, needy and controlling. I feel “strong female characters” are those that the writer is unafraid to show the complexities of.

And no, there aren’t enough of them but I do believe there’s a market for them. Very much so. It’s not always that the mostly male writers out there are necessarily misogynistic, I think they are often just a bit thoughtless and we have this mire of our history to wade through where very often the male-centric industry is lazily unthinking when it comes to developing female characters. They could be having a lot more fun with their work by just looking at these characters as equal in interest to the men and with more women coming through as writers and directors and, frankly, with more actresses recognising they can encourage better rewrites when attached to projects, I think we can redress the balance all round.

How has the feedback been from the public with this being released at such a sensitive time for Scots/English relations?

I’ve had my first shitty tweet on the subject. No one ever gave me grief before so yes, it’s clearly an incendiary subject. I think people get arsey about it “using” the referendum in some way but in fact the film was written ages ago and made last year when none of us were thinking about it.

It’s an entertaining thriller at the end of the day and I don’t feel it’s an irresponsible one either.

Can you tell us one of your favourite places when  in London and Scotland?

In Scotland I just love walking my old home town of Edinburgh. I love to get a hot chippy in the cold and cover it in brown sauce. In London I love a walk through Richmond Park in the deer rutting season (October). It’s so dramatic. Of course that’s actually a very Scottish thing to witness…

White Settlers 2 – The English strike back ,  how about it?

Pitch it to me!

Whats next for you?

I’m in development on a comedy I’ve written, a film I’ll direct, and am preparing to play a comedian. As research I’m doing stand up comedy. Stand up is way scarier than shooting any scary movie.

White Setters is out now  to view-on-demand and  DVD on Monday. For more information on what Polly Anna is up to why not follow her on Twitter? @PollyAMcIntosh

Chivas ‘Made for Gentlemen’ by Bremont Watch Company