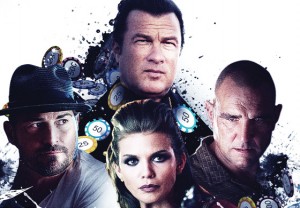 Professional high stakes poker player, Jack Daniel (Jack Eads; CSI: Crime Scene Investigation, ER), gets in with the underworld when he takes a wager proposed by Duffy (Stephen Lang; Avatar, Men Who Stare at Goats), a mysterious gambler. To protect his family and himself, Jack must outwit Lewis (Ted Levine; Shutter Island, American Gangster) and his scheming wife May (AnnaLynne McCord; 90210, Nip Tuck) as each attempts to force him into murdering the other. Jack seeks the help of Paulie Trunks (Steven Segal; Under Siege, Executive Decision), a loan shark looking to collect on Jack’s poker debts, and protect his investment.

GUTSHOT is released on DVD on 16 February 2015 but we have three copies to giveaway, to win just email us with the subject ‘GUTSHOT’at enterthecomp@gmail.com by Feb 16th when three winners will be drawn at random.