To celebrate the release of Bad Neighbours 2 in UK cinemas on Friday 6th May 2016, we’re giving away an exciting merchandise bundle including a Bad Neighbours 2 Bluetooth speaker, backpack, T-shirt and bottle-opener Sunglasses.
Returning stars Seth Rogen, Zac Efron and Rose Byrne are joined by Chloë Grace Moretz for Bad Neighbours 2, the follow-up to 2014’s most popular original comedy. Nicholas Stoller again directs in a film that follows what happens when the will of parenthood goes against the bonds of sisterhood.
BAD NEIGHBOURS 2 IS OUT IN UK CINEMAS ON 6 MAY 2016. 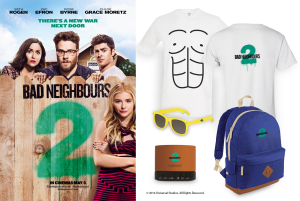 we have three sets to giveaway, to be in with a chance just email us at enterthecomp@gmail.com , closing date for entries will be 19th May 2016 when a winner will be chosen at random 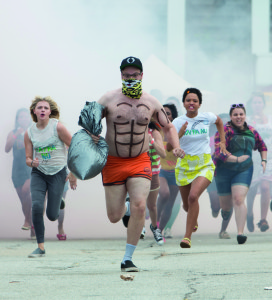 Prize Terms and Conditions
a) The Prize must be delivered to one UK address.
b) All prizes elements are subject to availability.
c) The Prize Supplier reserves the right to substitute any prize with a prize of equivalent value.
d) Anything not specified in these terms and conditions as being included in the prize package is excluded.
e) If the Winner elects to partake in any or all portions of his/her prize, the prize will be awarded to Winner and any remainder of the Prize will be forfeited and shall not be subject to further or alternative compensation.
f) No cash alternative is offered for any Prizes and they are non-transferable and non-refundable. Winner(s) cannot change, vary, substitute or extend any element of the prize (in whole or in part).