We’ve been in the age of superhero movies for a while now, but ever since 2012 even that genre has transformed a little bit. Back then, a superhero film usually depicted a single hero, either in an origin story or in a complex battle against a unique new threat. But with 2012’s The Avengers and many movies we’ve seen since, the genre has become more focused on showing heroes together on screen, either working together or, as with some of this year’s biggest films, clashing against one another. It’s proven to be extraordinarily effective; with more heroes on screen, there’s just that much more for fans to get excited about.

We’ve seen a lot of these superhero mash-ups already. The Avengers and its sequel put together a whole team of iconic superheroes; Batman v. Superman: Dawn Of Justice put Superman, Batman, and Wonder Woman all on screen. Captain America: Civil War introduced Spider-Man to the Avengers, and even in the second season of Daredevil on Netflix we saw multiple superheroes coming together. But there are plenty of other superhero mash-ups that we haven’t seen, and that we likely never will. 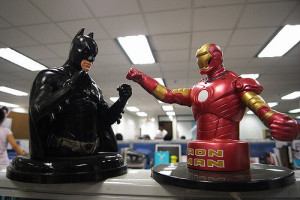 Just for fun, here are five that would make for incredible movies.

It’s been argued that Black Panther is the answer to Batman, and while there are definitely similarities between them, Iron Man is the more prominent pairing for the Caped Crusader. This one’s not too hard to figure out. Both are essentially billionaires who create amazing superhero suits in which they can effectively fight crime. Batman may depend more on fighting ability while Iron Man relies almost entirely on technology, but for both men the true power is in wealth and intelligence. It would be very cool to see them joining forces on screen, perhaps in a more political film that would see their considerable resources put to use in an international conflict (rather than against any old super villain or alien threat).

Sure, Thor is kind of supposed to end up with Jane Foster, and their romance has been so real on screen that Chris Hemsworth’s actual wife once stepped in for a kissing scene and nobody noticed the difference. But if we forget about the Hemsworth-Natalie Portman pairing that already exists in film, Wonder Woman seems like a perfect match. She’s at least quasi-immortal, is usually described as the daughter of Zeus, and is about as strong as Thor, seemingly. What better match could there be than the son and daughter of Odin and Zeus, respectively? As for how this movie would go, it would have to be very self-aware, because a romantic superhero adventure featuring two prominent comic demigods would inevitably be over-the-top. It would be fun to see them take on the titans or some other force from the Greek mythology that makes up Wonder Woman’s background (gi
ven that we’ve already seen the Asgardians of Thor’s history in Thor and Thor 2).

There may actually be a tiny possibility that this one happens. The two are at least part of the same comic empire, and they actually complement one another in a roulette arcade featured among a selection of similar games online. Wolverine, Spider-Man, and a few of the Avengers provide some character and background for an experience that would otherwise be typical of casino arcades. But the roulette game isn’t based on any particular movie or comic, so the idea of a Wolverine-Spidey mash-up is still pretty much left to our imaginations. Still, how fun would it be to see one of the most gruff and serious superheroes alongside one of the most carefree and wisecracking? Perhaps a Wolverine-Deadpool collaboration would be similarly entertaining (and is more realistic), but imagining a film in which Wolverine is dragged into a New York crime scene and has to fight with Spider-Man for justice is a lot of fun.

Both Moon Knight and Black Panther are covert warriors who gain mysterious powers in Africa. The risk with a mash-up of these two would be furthering the harmful misconception that Africa is a single entity rather than a collection of very different countries. However, because Black Panther hails from a fictional country, he could be said to neighbor Egypt (where the Moon Knight gains his powers) to make things a little bit more plausible. Looking past geography, these two just make sense as a crime-fighting duo. It’s a pairing that’s perfectly possible given that they also belong to the same studio, and Moon Knight has yet to be introduced in film. It’s been the topic of a lengthy discussion, so it’s at least on fans’ minds. But if nothing else, you can at least play with both of these characters in the Contest Of Champions mobile game.

Finally, this one is almost too easy. The two characters belong to different companies—like other pairings on this list—so it’s unlikely we’ll ever see it. But as aquatic superheroes, both Namor and Aquaman are somewhat isolated by nature. They’re not exactly the same character but they’re pretty close, and as such they could form a natural, compelling, and entertaining dynamic duo of ocean-based superheroism. We’ll get our first look at Aquaman (to be played by Jason Momoa) in 2018, but so far there’s no word of Namor getting a cinematic appearance.

It may be that we never see any of these. But in the age of superhero mash-ups, they would sure be a lot of fun. And this is only touching on the unlimited combinations that could (and might) be thought up.