Put to the Test: eyeSlices 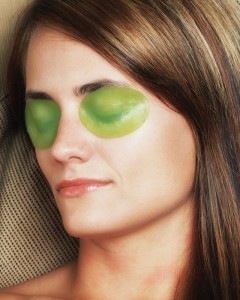 Some product names are catchier than others and if I’m honest, the first image that popped into my head when I read eyeSlice Professional was not a very pleasant one.   The eyeSlice is a gel treatment for, you guessed it, your eyes!  Hailing from South Africa it has been launched only now in the UK and whilst aimed at the make-up professional, mere mortals can buy it online from The Pro Makeup Shop

As a gentlemen of almost advancing years I felt it only right that I should test the claims of the eyeSlice out.  I was told that in just five minutes I could benefit from patented Cryogel technology. I nodded sagely while it was explained to me that this is a dermal delivery system that combats puffiness, dark circles, wrinkles, tiredness and the signs of ageing with some potent botanicals.

I was sold, not least when told that the eyeSlices can be reused up to ten times and you could buy refill  packs. So far so good but would the eyeSlice really offer me an instant cooling sensation without a fridge? Would I be left after 5 minutes thinking the eyeSlice pads had stimulated the circulation around my eyes leaving me with the feeling that I’d enjoyed a soothing sensation resulting in comfortable eyes?  After pausing for a few minutes to gather back my breath I can say that the answer is…

Without a doubt the answer, for me, was yes!  The first thing that struck me after peeling back the metallic foil seal was the moisture packed into the gel pads. The slippery pads did feel a little sluggish as I applied them to my eyes.  Claims that they would stay on, even while sitting upright seemed a little far fetched from my first experience, the pads really are so moisture laden they can’t help it, however by the third time I used them they had lost some of their moisture and fitted quite snugly around my eyes.

When applied I did feel a cooling and tingling sensation around the eyes that was very much in the pleasant category.  As you only leave them on for 5 to 10 minutes you don’t really have to give up too much time and certainly felt much more invigorating and refreshing than merely applying eye drops.  After 3 days I wasn’t sure I could see any discernible difference in the dark circles I usually carry around with me, the downside to insomnia, but after 5 days I was starting to think there was a noticeable improvement. It’s for that reason I recommend them, using the eyeSlices is quick and mess-free and when I looked in the mirror I saw a difference.

The initial cost is £14.99 for a pair of eye pads in a plastic case that is quite compact and fits in your pocket.  Refill pads cost £9.99 a pair.  When you consider they can be used for up to ten times the eyeSlice is actually a very affordable treat to yourself and your eyes.  With more men burning the midnight oil it is their eyes that are taking the punishment.  With the eyeSlice all that’s needed is 5 minutes once or twice  a week, a session that will only cost you between 99p and £1.49.  Yes, mere pennies for fresh, brighter eyes.

How Not to Grow Up: A Coming of Age Memoir. Sort of