Home » Articles » Film/TV » AN OVERSIMPLIFICATION OF HER BEAUTY

AN OVERSIMPLIFICATION OF HER BEAUTY

If you are looking for something a bit different to take your partner to this Valentine’s day then how about the new film written and directed by Terence Nance? 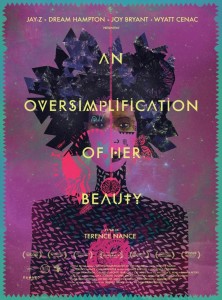 The film focuses in as a artist hypothesizes about why he feels bad when a mystery girl stands him up. The event prompts him to ask: what’s the content of a momentary feeling? Is it the sum of your experiences? And, perhaps more importantly, are your experiences the sum of you?
I wont say anymore than that as its one of those films that’s both hard to explain but in a way it would also spoil it to do so too much, but I think it’s a perfect film for Valentines Day that explores relationships and what they mean to each of us.
The film is out now in selected UK cinemas through Picturehouse cinemas.

Picturehouse is the leading independent cinema chain in the UK and will also be supporting the film through their ‘Discover Tuesdays’ programming. All participating cinemas will be screening An Oversimplification Of Her Beauty on Tuesday 11th February.
To find out details of where the film is showing and book tickets go to: http://www.picturehouses.co.uk/Picturehouse_Recommends/Discover_Tuesdays/
Picturehouse have kindly offered a signed script from the film by director Terence Nance, for a chance of winning just email us at enterthecomp@gmail.com and also make sure you are a subscriber to the site.
A winner will be picked at random on the 14th Feb 2014

THE DRIVING FORCE BEHIND EUROPEAN FOOTBALL