Craft beers are the new cool kid on the block errm beer wise and what does cool usually mean? that’s right expensive! Ive recently like many acquired a taste for a good IPA and other decent craft beers with lots more flavour and taste than my usual lagers so I was quite excited when I heard Wetherspoons have agreed to an exclusive deal to bring over three of New York based Sixpoint’s best offerings.

The Six Point Cans currently being offered come in choices

Sweet Action – a 5.2% cream ale , fruity and goes down a little too easily!

Bengali Tiger – a monster 6.4% IPA, this is deliious but be warned this one really does sneak up on you! I was staggering after three cans of this stuff!

and the most exciting thing? as of today Wetherspoons are offering all Sixpoints cans at only £1.99 a can which is a complete bargain!

as you can see I rather enjoyed The Crisp last night, all in the name of research of course… 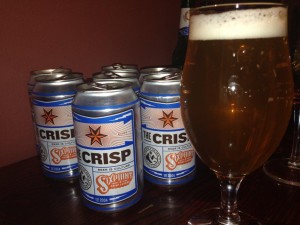