Home » Articles » Film/TV » Out of the Furnace – Review

Out of the Furnace – Review 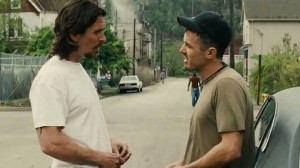 When I saw the cast they put together for this movie, I really couldn’t wait to see it. After The Mechanic and Batman, Christian Bale really can’t do any wrong in my book , and Casey Affleck in my opinion is one of the best actors of the day. The movie is a slow and violent portrayal of two brothers living in a hard depressing steel town . While one serves time in prison , the other serves time in Iraq . Casey Afflecks portrayal of a war veteran fighting his demons while bare knuckle fighting his way out of debt really catches the mood of this wrong side of town story. When told to take a dive by the massively vindictive and money driven Degroat (played by a superb Woody Harrelson) and still getting murdered for it , it’s left to his older brother to take it into his own hands. Throw in a police force who don’t want to know , captained by Forest Whitaker and his Uncle played by Sam Shepard this moody , brooding story comes to it’s violent conclusion.
An all star cast , of which Bale shines , really make this tale believable , this could be any small struggling town and it’s people , all slowly heading to a harrowing end.